Dr. Jacqueline Gautier reflects on the tenth anniversary of the earthquake that devastated Haiti. 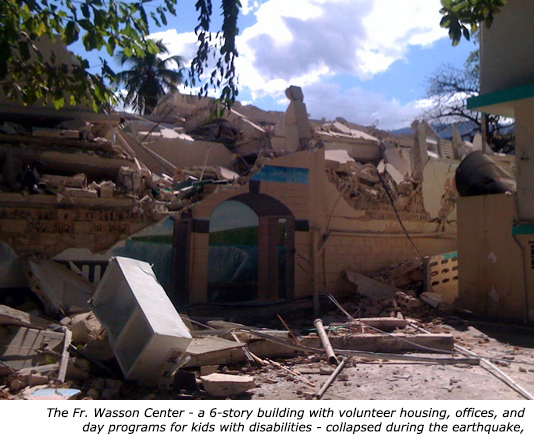 KEY PROGRESS POINTS FROM THE 2010 EARTHQUAKE ->

On January 12th, 2010, at 4:53 p.m., Haitian people will always remember what they were doing at that moment. So much happened with incomputable consequences in just 35 seconds.

I was just back from NPH’s St. Damien Pediatric Hospital. I entered home as usual by the kitchen door after parking my car. I sat down for a phone conversation with one of my best friends. As we hung up, the first wave struck, extremely strong with a terrible rumbling sound as if a train was speeding underground. “Tremblement de Terre,” my daughter Nathalie and I shout. We both rushed towards our gate to get out of the house as the seismic shocks continued. We passed by my car, which was bumping up and down. Suddenly everything stopped. Since our home stood intact, we thought, even if the experience was horrible, no real damages had occurred, apart from myself: I twisted and broke my right foot running on the shaking ground. I could tell by the acute pain and immediate swelling.

However, we were hearing nonstop screaming from downtown Port-au-Prince, and we began to see big clouds of dust rising. It was beginning to dawn on us that the city had been hit terribly.

From that moment, the chaos commenced. My husband was missing. I looked everywhere until I learned on Day 1 post earthquake that he had died a few kilometers away, close to the epicenter. He was a civil engineer, discussing a renovation project at a school. 150 people died at this institution located on top of a hill, mostly vulnerable children in their classrooms.

Going through the streets, seeing dead people everywhere it felt like living through a war zone after the last battle had ended. The poor quality of the constructions, the lack of preparedness of the population turned this 7.1 magnitude seism into one of the biggest catastrophes of our time with approximately 200,000 deaths and 5,000 amputees.

Most people in the country affected were directly or indirectly traumatized. Nevertheless, it was a time of great solidarity. We comforted each other, we buried our loved ones, our friends, our neighbors, quickly, without announcement, without a funeral ceremony. In fact, people would learn sometimes months later that someone they knew had died during the earthquake. Fr Rick Frechette who brought NPH to Haiti left his dying mother in Connecticut, with her blessings, to come organize the rescue efforts with us in Haiti.

At the hospital we lost three staff members: our nurse responsible for the ambulatory clinic (her house collapsed with her and her 3-year-old daughter), another nurse from the HIV program and one at the general inpatient ward. Many employees lost loved ones or had relatives injured.

Our former hospital building in Pétion-Ville turned into the Father Wasson Center, a guest house with many other functions, collapsed killing three volunteers. Several others were severely injured there. It would well have been worse had our hospital still been located there. Fortunately, we had moved to our new location in Tabarre four years earlier.

The search for survivors occupied the whole country for a long while in the aftermath. We were in the world’s spotlight for months. Tent cities were erected everywhere.

Fortunately, our hospital resisted well, only a few cracks here and there, no serious damages according to the assessment done by an Italian team of military engineers. As I entered the building on January 14th, Day 2 post earthquake, the place had changed into an outdoor hospital, full with traumatic orthopedic cases, mixed with the children already hospitalized. As with many other institutions in Haiti, we received tremendous international support to care for the wounded and sick. A small tent village served as a guest house for a long time in our backyard. 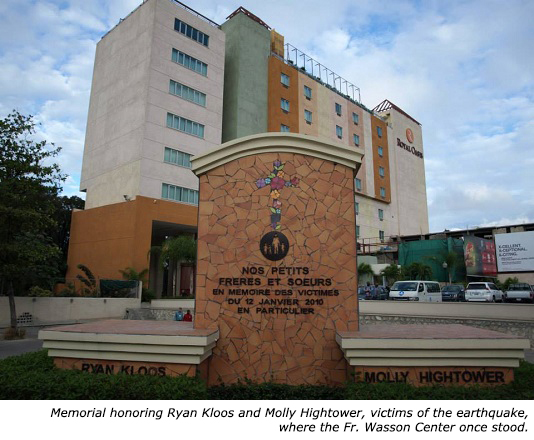 For St. Damien, and for NPH in general, this earthquake turned into an opportunity of growth. We opened a new maternity service for pregnancies at risks, thanks to Fondazione Rava and their partnership with Buzzi hospital in Milan. Later Fondazione Rava also helped us open a neonatology service partnering with Bambino Gesu in Rome. The prestigious American Academy of Pediatrics dispatched a stream of pediatric volunteers to come work for one year in several hospitals in Port-au-Prince including at St. Damien. Also, a few US children hospitals joined us around that time, creating a St. Damien Collaborative global pediatric movement to support our programs as well.

While this catastrophe inflicted deep mental and physical wounds to our nation, it also brought positive development for our hospital. Undeniably there were also regrettable mistakes done during the relief efforts in Haiti. Pitfalls of the massive humanitarian aids: waste, local and international corruption.

Because of our very limited resources and our deep-rooted governance issues, it will take us a long time to turn around the country’s grim socio-economic situation worsened by this earthquake. Unfortunately, 10 months later a severe cholera outbreak brought by a UN contingent from Nepal killed up to 10,000 people in a matter of two years and stretching. Without mentioning the deleterious effect of a few major hurricanes, the following years.

The struggle continues for us. Nonetheless, NPH and St. Damien remains at a leading position providing access for quality mother and children care. We will continue to hold up with courage, faith, hope and support. 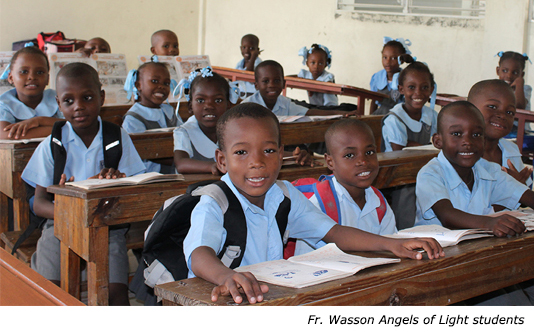 KEY PROGRESS POINTS FROM THE 2010 EARTHQUAKE

Father Wasson Angel of Life (FWAL) Program:
Expansion of childcare services for displaced, vulnerable and at-risk children and youths. Founded and managed by Hermanos Mayores (adults that grew up at the flagship NPH Haiti home, St. Helene). Originally, FWAL served up to 600 children. This increased to 2,000 children weekly in first year and a half (200 staff, 110 of which were Hermanos Mayores). For the remaining 3.5 years, 1,000 children benefited. Day camps turned into schools and two homes were established, St. Anne children 0-6 years old and St. Louis age 7 – 18. The homes served as a safe haven for children who experienced severe trauma and ensured their safety in a secure environment.
…
…
…
Accomplishments

…
FWAL School and Nutrition
Lunch menus planned carefully to make sure the children’s meals are extra nutritious, as for many our external students will only eat this free lunch daily.
…
…
University Program:
NPH Haiti has university students studying in the US, Dominican Republic, Mexico and Germany. The first medical student graduated in 2010.

…
*Figure lower due to the disruption of studies caused by protests.
…
…
Special Needs Programs:
In Haiti, one in 10 people are disabled and those with special needs are often treated as sub-human and without rights. The Special Needs Programs of NPH Haiti offer alternative, rehabilitative care to this vulnerable population, with the goal of having each child and adult reach their full potential. An average of 100 students have attended the Kay Germaine school since the earthquake, with the majority of them receiving physical, occupational and speech therapy. 250 children receive therapy monthly between all the programs.

Of the estimated 800,000 people with disabilities in Haiti before the earthquake, 200,000 were children. The Government estimates that 300,000 people were injured in the disaster, many of whom will suffer long-term disabilities. 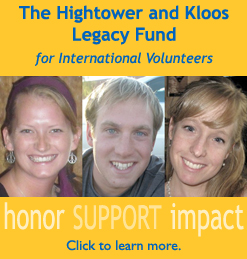