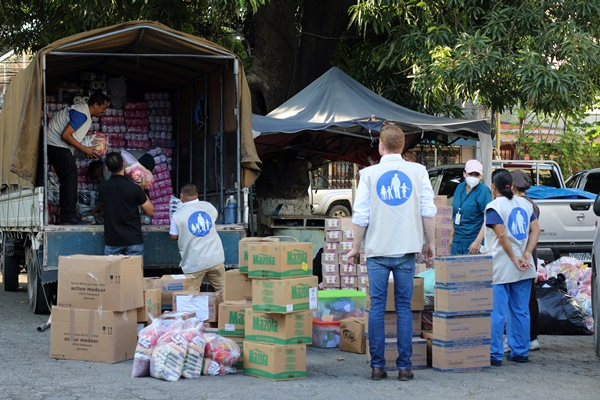 Honduras is located in the heart of Central America, with coastlines on the Caribbean in the north and the Pacific on the south. While the beautiful beaches attract millions of tourists every year, it also exposes departments throughout the northern and central regions to flash flooding in the rainy season, particularly between September and November. This was the case during the month of November 2020, when Honduras was hit by two high-impact tropical depressions named “Eta” and “Iota”.

According to official reports on the impact of Eta and Iota issued by the Permanent Contingency Commission (COPECO), 78 deaths have been recorded and nine people have disappeared, while also affecting the homes and livelihoods of 3.5 million people – over a third of the population – with 272,161 Hondurans having to evacuate their homes, 119,919 of who received shelter, and more than 102,000 still do not have access to basic services. In addition, 110 overflowing rivers/streams were reported, 33 bridges destroyed, 200 houses completely demolished, and 1,259 homes with minor damage. Once again, Nuestros Pequeños Hermanos Honduras set out to support the most vulnerable families in the country by travelling to one of the worst affected cities in the north, La Lima.

La Lima is a municipality of San Pedro Sula, the “industrial capital” of Honduras, and has a population of 75,000 people. Known for its cultivation of bananas due to its tropical savannah climate which reaches 36 degrees at certain months of the year, it became one of the focal areas of the ‘banana republic’ in the early 1900s. Being located in a valley, floods, even from regular rains, are frequent in all the communities. However, during the Eta and Iota storms, extreme damage was caused in communities such as Flores de Oriente, Samaritana, San José and Rivera Hernández neighborhoods, which were visited by the brigade directed by NPH Honduras.

“We received a donation of $31,000 USD to carry out this brigade, thanks to Humedica International Aid and individual donors, with whom we invested 300,000 Lempiras [approximately $12,385 USD] in medication. We also bought hygiene supplies, biosafety material and food to help alleviate the situation which the inhabitants of this area find themselves in. With this initiative, we had the opportunity to reach people in nine communities and three shelters,” says Lauren Pach, Project Coordinator of NPH Honduras and organizer of this activity. “We formed a multidisciplinary team with 24 people, including doctors, nurses and psychologists to address the emotional impact of those impacted.”

“I had only seen these scenes in photographs and on television, but until you are in the place and see the total destruction you realize how vulnerable we are as human beings. These people have invested their time, resources and entire lives in what they had. Now they must start again from zero. I am touched, but also motivated to continue looking for a way to contribute in this fight against a situation that is bigger than us. It is a blessing to be able to help,” adds Stephen O’Mahony, National Director of NPH Honduras.

In addition to providing food and treatment to 1,507 people, children received toys, as well as took part in fun activities. Also, people received psychological attention and rapid COVID-19 tests, since the vast majority of the inhabitants were exposed to the virus having not had access to biosafety supplies.

“I lost everything. The only things I have are the clothes with which I left my house. My mother and brother almost drowned, but thank God we are alive. We are very grateful to the people in solidarity who support us, and especially to Nuestros Pequeños Hermanos for this brigade. I should not cry. I must have hope that I will move forward and ask God for the strength to start over,” says María, a resident of the Rivera Hernández neighborhood.

“We are very grateful to the One World Surgery team, the National Investigation Police, the Directorate for Children, Adolescents and the Family (DINAF), and the Mayor’s Office of San Pedro Sula and the Municipality of La Lima, for supporting us during the two days to carry out this brigade,” adds Lauren.

Around 800 families benefited from the initiative, impacting the lives of more than 1,000 people, 400 of which are children.

Help of NPH through the OneFamily Program

Among those affected by the storms “Eta” and “Iota” are six families in the One Family Program, which reintegrates children with their biological families after spending a period of residential care at the NPH Honduras home, Rancho Santa Fe. Through this program, social and psychological assistance is provided to families facing crisis that could lead to family disintegration.

Currently, two of these six families have lost their basic grain plantations, which was their main source of income. Others have lost the roofs from their homes and belongings, and some have had to evacuate. However, thanks to the management of the Department of Social Work, the Mayor’s Office of San Pedro Sula has supported the evacuated families and they have now returned to their homes. “These affected families have also received support from the Manos Solidarias project. This program allows us to provide food baskets on a monthly basis to these families in vulnerable conditions,” adds Nidia Rodas, coordinator of the Social Work Department at NPH Honduras.

Up to now, the affected families have received a donation of mattresses from NPH Honduras and are also receiving constant psychosocial monitoring via telephone. They receive the continued support with reconstruction and repair material and management of their homes, a project that is expected to be undertaken in early 2021.

Photo above: Thanks to Humedica International Aid and individual donors, NPH Honduras invested $12,385 USD in medicines, hygiene supplies, biosafety material and food. Photos below: The reality in La Lima, after Eta and Iota; five doctors offered general consultations to the affected people; nurses carried out the pre-clinic process during the two days of the brigade.