Change the World. Start with the Children., a new book detailing the life of Father William Wasson, his philosophy, and how he changed the world was published in April 2020. 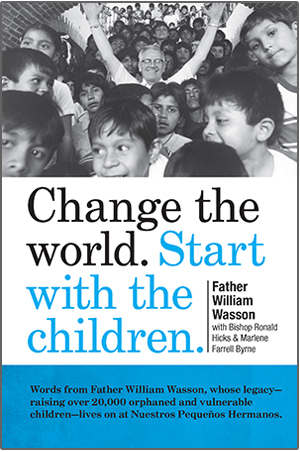 May 4, 2020
This book includes words from Father Wasson himself, his four principles of successfully raising compassionate children, and stories about those who were directly impacted by his unconditional love and support.

In 1953, Father Wasson was assigned to a church in Cuernavaca, Mexico called “The Church of the Poor.” One night, the church was robbed by a 15-year-old boy who was simply trying to feed himself. Unwilling to press charges, Father Wasson went to the judge on the boy’s behalf and requested custody of the child. The boy became the first of over 20,000 children that would be raised in the nine homes of Nuestros Pequeños Hermanos (NPH).

NPH homes take in vulnerable children with no family or have families unable to care for them, and provide a safe home with food, love, healthcare and support, along with a quality education. Located in nine Latin American countries and the Caribbean, NPH homes work to ensure the happiness and wellbeing of every child that walks through the door. Children are raised with their NPH brothers and sisters, not put up for adoption and are encouraged to gain a solid education and use their talents to become leaders in their own countries.

The book includes excerpts from the manuscript written by Father Wasson in 1976. It showcases his philosophies for raising the children in his NPH family and how his principles can be applied to families everywhere.

“I became a volunteer in 1989 and Father Wasson’s family was clearly living by these important principles,” said Bishop Ronald Hicks, Author. “I believe everyone who is impacting a child’s life – whether parent, guardian, teacher or friend – will learn important lessons from his clear yet simple guidance.”

ALL proceeds from the sales of this book will be donated to NPH USA.

The book, Change the World. Start with the Children. is available on Amazon.

Nuestros Pequeños Hermanos (Spanish for “Our Little Brothers and Sisters”) provides a home for thousands of vulnerable children. Since 1954, NPH has created a loving and safe family environment for children living in extreme conditions in nine countries in Latin America and the Caribbean. Through comprehensive education, healthcare and spiritual formation, NPH gives children the opportunity to develop their potential, shaping better futures for themselves, their families and their countries.

ABOUT THE OTHER AUTHORS

Ronald Hicks, Auxiliary Bishop of Chicago, was born on August 4, 1967 and raised in South Holland, a suburb of Chicago. After graduating from college in 1989 with a B.A. in Philosophy, he left for Mexico and volunteered at NPH for one year. Upon his return, he entered the major seminary and was ordained a priest on May 21, 1994 for the Archdiocese of Chicago. He ministered in a variety of parishes and then served as the Dean of Formation at St. Joseph College Seminary and also at Mundelein Seminary. In 2003, he earned the Doctor of Ministry Degree from The University of Saint Mary of the Lake. In July 2005, with permission from Francis Cardinal George, he moved to El Salvador to begin his five-year term as Regional Director of NPH in Central America where he was affectionately called, “Padre Ron.” On September 17, 2018, he was ordained a Bishop by Blase Cardinal Cupich at Holy Name Cathedral, Chicago.

Marlene F. Byrne has worked her entire career in advertising and authored six books. She became involved with NPH at her parish and served on the Midwest Board of Directors for NPH USA. Her family hosted an NPH boy, named Juan, from El Salvador while he received treatment at Shriners Hospital of Chicago. She also sponsored a boy, named Samuel, who went on to study social work at Northeastern University. She has assisted the organization in developing marketing and communications programs for their fundraising efforts.

Father Phil Cleary, Father Rick Frechette, Miguel Venegas and Reinhart Koehler, provided stories of the children who grew up at NPH and went on to achieve success.

Related Information:
• How Your Help Makes an Impact at NPH