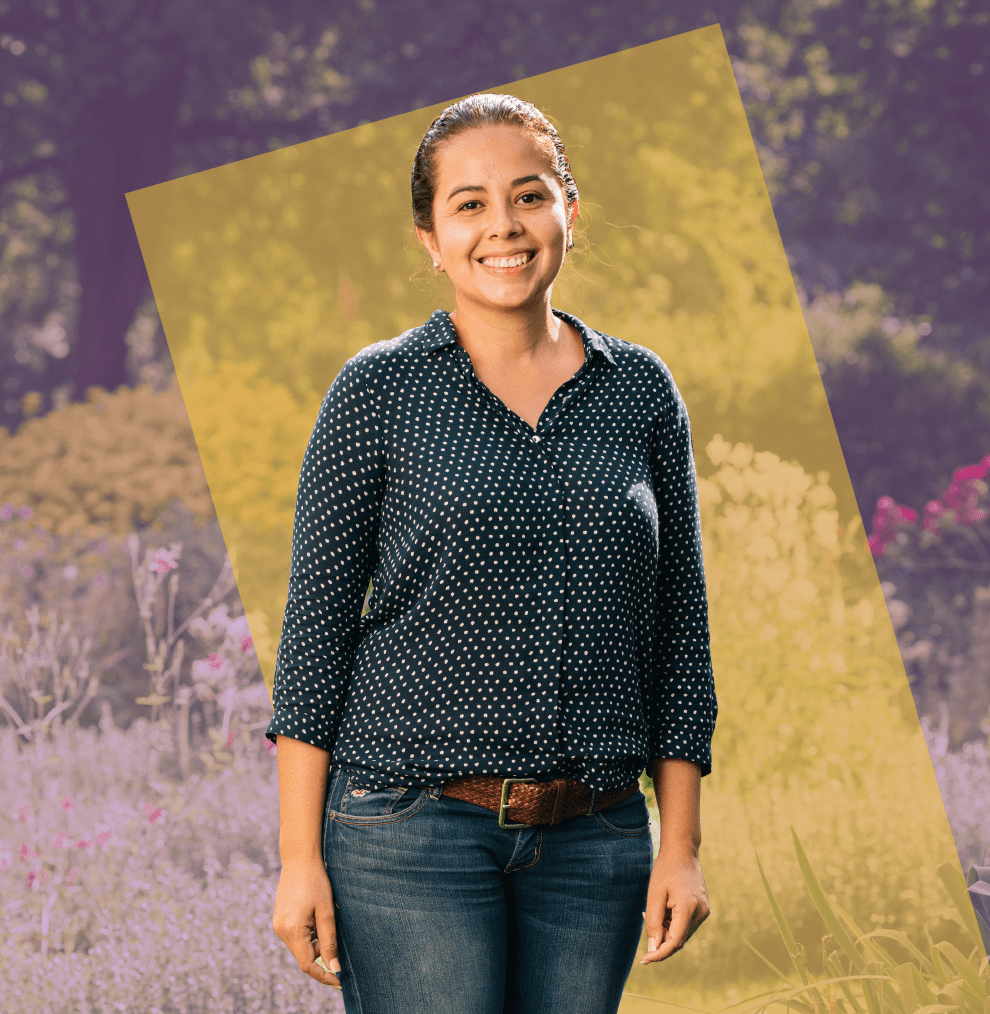 Hello. My name is Doris Lemus Serrano. I wanted to share a little of my story with you.

My story begins when I was 3 years old. I lived in Guatemala with my parents. My father went to work every day while my mother and I stayed home. One day when I asked my Mom for food, she hit me and broke my arm. After that day, my Dad decided to take me to El Salvador to live with his family. He then returned to Guatemala to try and fix the problems in their marriage and circumstance, but while he was there he died.  And so, I continued to live with my aunt and her daughter in my home country of El Salvador. My aunt was sick and elderly, so my cousin took care of me. I began kindergarten then, but often missed class because my cousin hit me and sometimes I was forced to stay home to help clean or cook.

When I was in first grade, my neighbor called the police about my situation.  After that, I lived in three different places for children, they were like group homes or foster care.

Eventually, I had to leave and they asked me if I wanted to live with my family or another children’s home called NPH.  That is how I came to NPH. I was almost 15 years old and I remember dreaming about my Quinceaños party.  At NPH, I got to have my party with 21 other girls.  We had new dresses, food, and we all danced. It was so fun!

I was 14 and in 5th grade when I arrived at NPH, but my teacher moved me up to 7th grade because of my academic abilities. After I finished middle school, I began my first year of service before moving to the city to study with the other NPH high school students. At NPH, we receive a lot, but we are also asked to give back and help in different ways.

In El Salvador, we all gave one year of service before high school, and another before or after university. In my first year of service, I was asked to directly care for 2 new babies who would be joining our NPH family – one was 3 months old and the other was 6 months old. At first, I said, “No, I don’t know anything about babies…I can’t!”  But I was encouraged, “Yes you can – I will teach you and be with you.”

So we went to the hospital to pick up Moises and I remember he was very fragile and only weighed 3 pounds because of malnutrition. A few days later Nancy arrived. She cried and cried for her bottle. She would not take milk though because she was used to coffee in her bottle. With time and love from their brothers and sisters at NPH, both babies have grown up quite a bit and are now in kindergarten.

Next I studied, graduated from high school and began my university studies in Psychology.  I also continued to support NPH as the assistant director of the baby house. I’m proud to belong to the NPH family. NPH also allowed me the opportunity to take a year break from my university studies in El Salvador and participate in, and graduate from, the NPH Seattle Leadership Institute.

Thanks to NPH, I was able to graduate from the university; I graduated as a psychologist. I have also had the opportunity to participate in different workshops which have enriched the tools to develop my work with the children. After graduating the university, NPH offered me the opportunity to participate in the iLEAP (now Perennial) program, also in Seattle. The day I graduated from the iLEAP program, Donna Egge arrived and she asked me if I wanted to work for NPH Honduras, as a Family Services Coordinator. At the moment I told her I would think about it. Of course, part of my life plan was to work for Nuestros Pequeños Hermanos, but that job offer was in another home.

After some months, I accepted the opportunity, so I moved to Honduras. I started my new job and parts of my responsibilities were to ensure childcare policies; evaluations of new employees who were hired, especially for the care of children and youth; induction process, among other tasks.

After working a year and a half there in Honduras, Tío Olegario, the then National Director of NPH El Salvador, asked me if I wanted to work for the NPH El Salvador home, and I said yes. He offered me the position of psychologist of the university students. It was when I was working in this position that I found out about the search of a new National Director, as Olegario would be retiring. After listening to many people, I felt called and encouraged, and ultimately decided to apply for the position. I kept this decision to myself and asked for God to guide my path to serve Him better and to understand His will to my life. Time passed and eventually I was contacted to provide some further information for my application; then I went through interview process with multiple different people. I was continuing my work as the psychologist for the university students, while somewhat anxiously waiting for an answer. Everyone at the home in El Salvador also anxiously and excitedly wanted to know who would be named as the new National Director.

One day, I received the call that I had been selected for the position. At the moment I felt a mixture of feelings. On the one hand, I was very happy, but on the other hand, I felt the weight of knowing that I would ultimately be in charge, responsible, and need to make often hard, but always significant decisions for the children, youth, staff and programs that were going to be under my responsibility.

I had two days to confirm my decision, so during a moment of prayer with God, I told Him that if that was part of His will, that He gave me the wisdom to face it. Again, while I continued to work as a psychologist for the university students, the time to make my decision and accept this new responsibility came quickly. The university students kept telling me how desperate they were to know who the new National Director would be, but I could not say anything, until I decided to accept that challenge, taking the hand of God.

Now I am the new National Director here, 20 years after Fr. Wasson founded the home together with Olegario as the director. Now it is my time to work for the NPH children and youth, the staff and communities we serve. Every day, there are many things to learn from the children and my dedicated team and colleagues. Working together, I know we can accomplish great things.

This new position invites me to see beyond of what the children and youth might need; offering them the best home life, love and opportunities; listening to them and helping them whenever is possible. The world, and El Salvador have changed a lot since NPH first began here. Our commitment to loving, supporting and being family to children continues, but we now have the ability to serve children and families in the surrounding communities in different ways as well, allowing us to help prevent families from falling apart in the first place and children to thrive with us by their side. We have a great program here working with students from the nearby communities who attend our schools. They need good educational opportunities, and we can provide that. We can help to teach not only how to read, but also the values of charity and love at the heart of our NPH family, so they too might work to better the lives for others in their communities.

The challenge and the responsibility in this new role big, but we could do none of it without a the dedicated team of childcare staff, psychologists, teachers, administrators, and everyone in between. Each member of the team approaches this work as more than just a job. This commitment is not limited only to our local team here, but also by all those who support us around the world. We know we are all doing something, part of something, vitally important, and together we can do it well and ensure the very best for children and the rights and opportunities of children everywhere.

I feel truly blessed for being part of this family. It has been thanks to NPH that I have achieved many things that I would not have accomplished if I had somehow stayed with my family, like graduating university and so many other opportunities that I have had. By accepting this job, I made a commitment, not simply or generally to children, but to children I recognize as my younger siblings; A commitment not to specific number of children, but rather to all children, that we might help provide the very best for each of them, for who they are and where they are.

I have cherished Godparents here in the Northwest, the best of memories, from my time here as a Seattle Institute Student, with my host family, fellow students and the entire NPH community here. I am grateful for all of the support you have provided to me and to NPH. I am grateful for all of the fundraising offices, and all who together make it possible to change the present and bet on the future of our children. Thank you so very much! 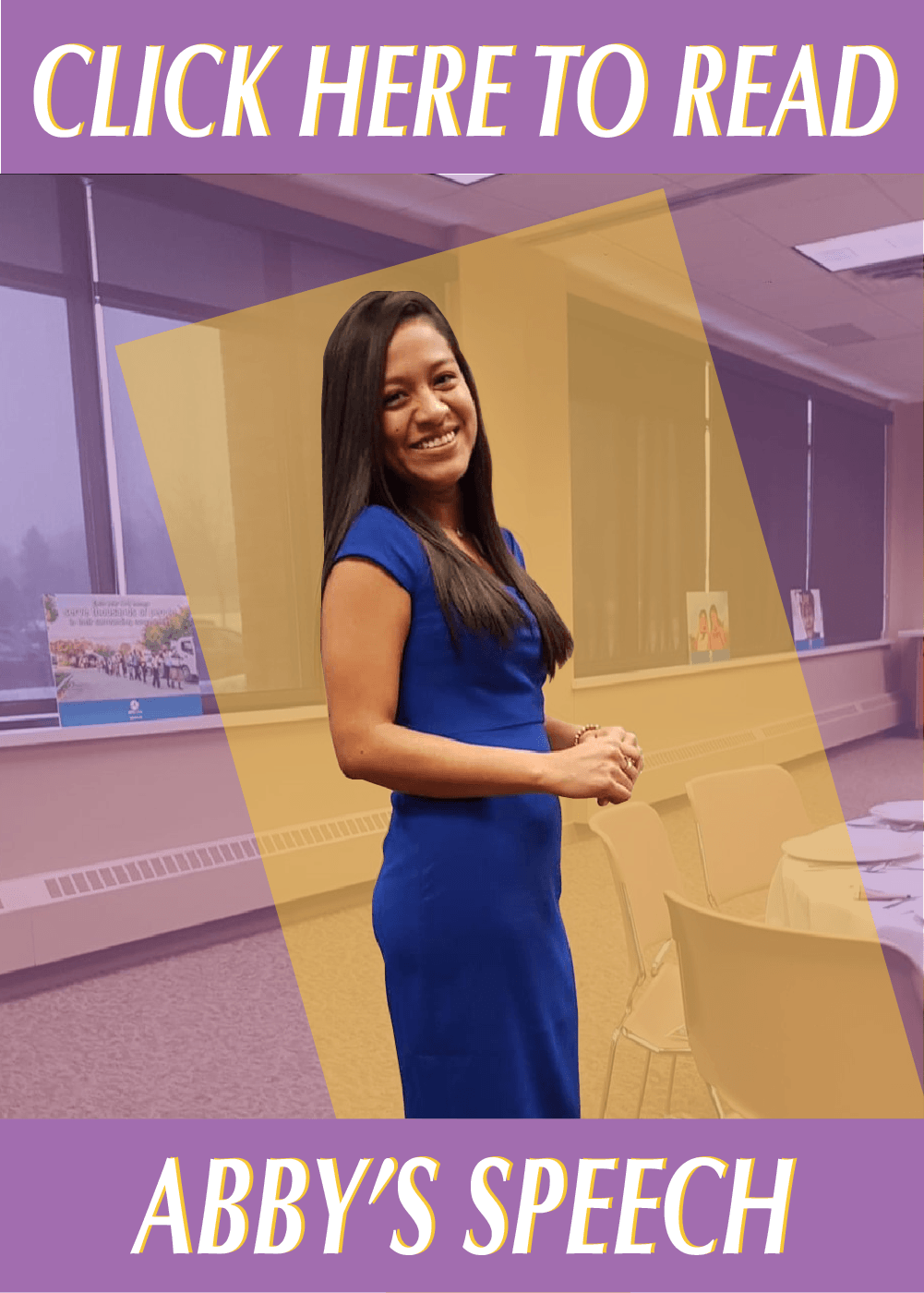 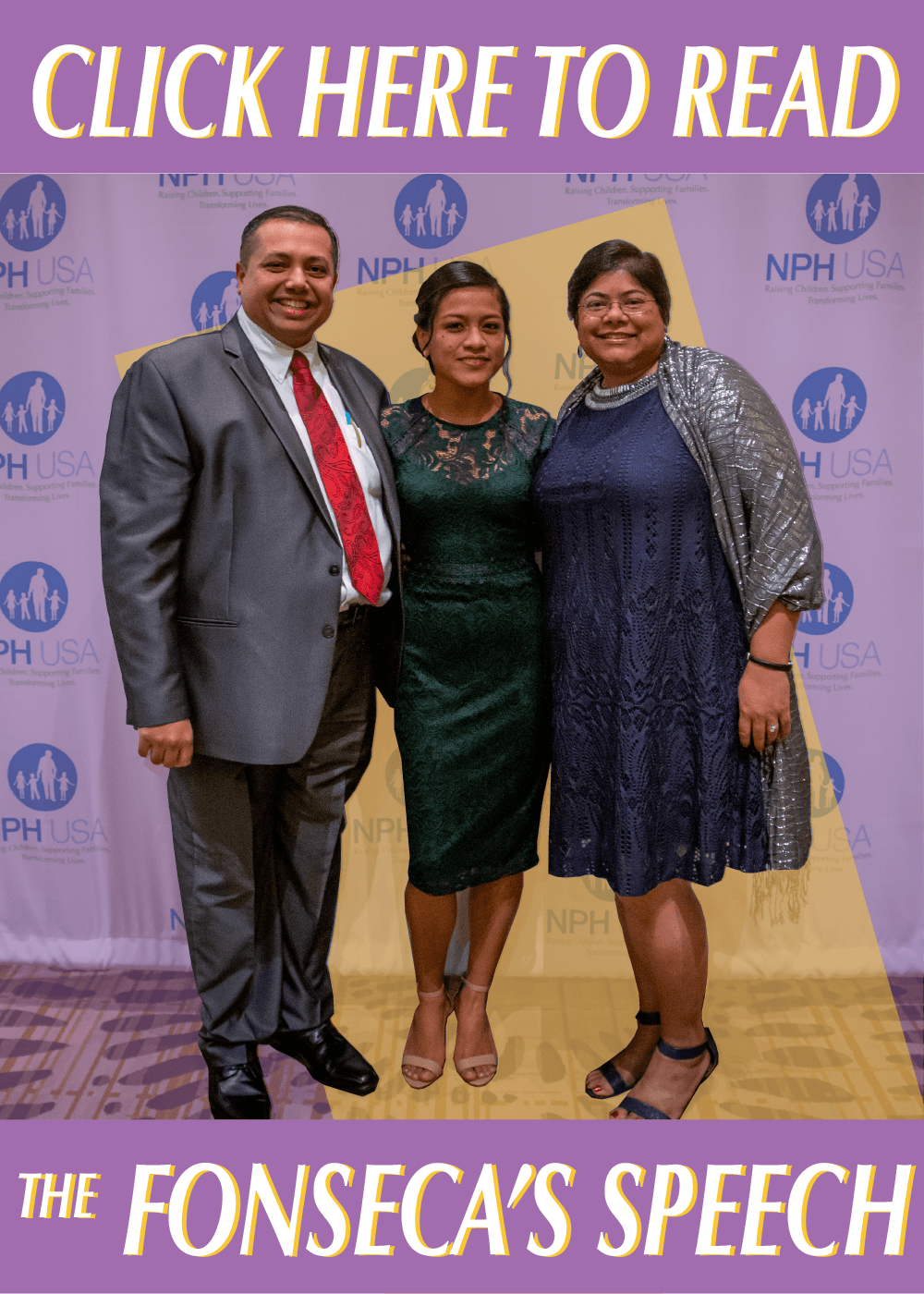 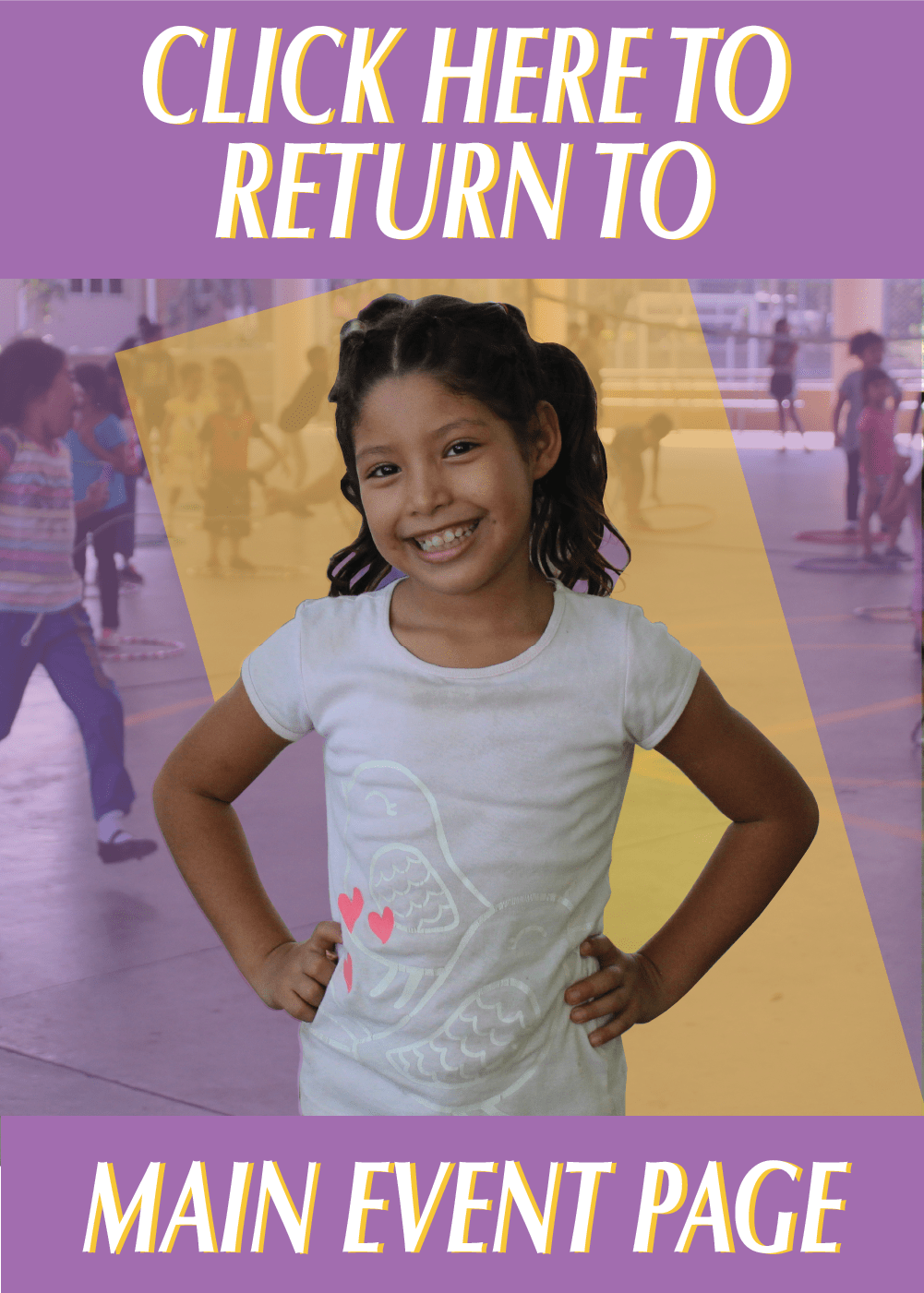