What Does it Mean to be Poor?

Every May 15, the United Nations and the international community recognize the importance of families. NPH’s Markus Streit looks at how poverty impacts the family unit and children in the countries that we serve. 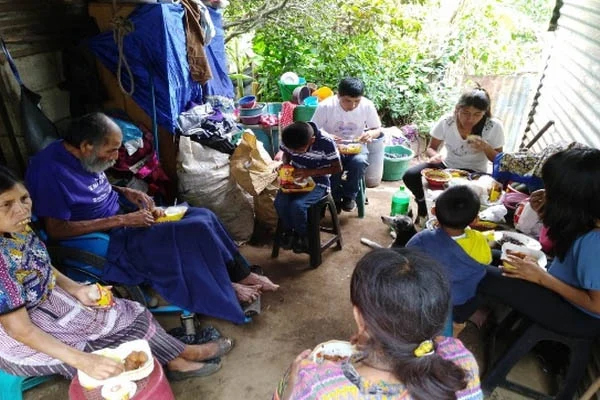 Families—both traditional and non-traditional—are the foundation of society. Usually, our most formative childhood years are spent with our families, and they are likely to be the most important people in our lives, so they should be celebrated.

But what if poverty or violence crushes your childhood, impacting your most important years of development?

It is all clear to us that children need safety and nutrition for healthy development. But often, poor families are not able to adequately provide a child with these and other necessities. Poverty – What does it mean to be poor?

Scientists and politicians can disagree about this for hours. One can make a long list of what one needs to at least lead a dignified life, but if someone does not fulfill the items on such a list, he or she may be considered poor. But you could also say that people are poor if they can buy less than their neighbors. Due to differences in wealth and cost of living between countries, each nation sets its particular definition of poverty. So how can we know when someone is extremely poor? The United Nations defines extreme poverty as “a condition characterized by severe deprivation of basic human needs, including food, safe drinking water, sanitation facilities, health, shelter, education, and information. It depends not only on income but also on access to services”.

Research established a worldwide standard for extreme poverty, so according to the World Bank, someone can be considered extremely poor if they have less than about US$1.90 a day to buy food or pay for their home. The international extreme poverty line of US$1.90 per day per person is based on the national poverty lines of lowest income countries depending on per capita consumption, reflecting the minimum amount someone needs in order to meet their basic needs.

Even that does not show the whole picture. If you are alone and have only to look after yourself, that amount might be enough, or at least enough to just survive in a country with very low living costs. But what if you need to take care of a family, one that may include children, youth, and elderly or people with special needs? Child poverty is the denial of children’s rights.

Children are not supposed to earn a living. Moreover, poverty is usually measured at the household level, not for an individual child or youth. Therefore, child poverty cannot just be measured by monetary income and household consumption. In addition, children experience poverty differently than how adults do. Children have specific nutritional, health, educational, and other needs which are different from those of adults.

Child poverty can be more broadly understood as the lack of public and private material resources for children and inadequate access to good nutrition, health, water, education, and shelter for them. If deprived of these rights, children have their childhood robbed from them, day in and day out.

Children worldwide are still denied their right to a standard of living adequate for their physical, mental, spiritual, moral, and social development. These deprivations can diminish the life chances of poor children and limit their ability to achieve their full potential. Not fulfilling these needs can have devastating, life-long consequences and present serious implications for children, future generations, and societies. Poverty hurts a child’s development, often leading to reduced levels of income and health in adulthood.

Children are also more existentially affected by poverty than adults. Many youths confront multiple simultaneous deprivations that negatively impact their childhood. They may grow up lacking access to education, healthcare, adequate food, and clean drinking water, all at the same time.

Never before in human history have there been so many children and young people in the world as today: around 3.1 billion of the 7.6 billion world population are under 25 years of age. The vast majority – around 90 percent – live in developing countries, where they often make up the absolute majority of the population. Children are not only a large group, one that makes up 34 percent of the world population, but they are also a particularly vulnerable and disadvantaged one. 48 percent, almost half of the world’s poor, are children.

According to UNICEF, in the countries where NPH is present, the percentage of children and youth who experience child poverty ranges from 37.6 percent in Mexico (2010) to 79.9 percent for Guatemala (2006).

What do these numbers tell us? We might be tempted to say: “Wow, that’s horrible, I didn’t expect the numbers of child poverty to be so high, let us change this!” or we might say: “in comparison to the poverty level in my country, there is not so much difference,” or even “it doesn’t look so bad… no need for solidarity here”. Child poverty rates are all relative and the numbers do not show the situation behind the figures: the reality that children must face day-by-day. In the eyes of a child, poverty is more than just about money.

For a child, the damage caused by poverty can last a lifetime and can take many forms. “Poverty has a negative effect on the mental, behavioral, and emotional health of children and youth through several pathways. Poverty and mental illness are intertwined in a vicious cycle that increases the risk of mental illness among the poor and maintains a downward spiral into poverty among those living with mental illness,” says Crick Lund, professor of Global Mental Health and Development, in a blog posted on the GlobalDev website.

We should recognize child poverty for what it is – a denial of children’s human rights and a violation of the United Nations Convention of the Rights of the Child.

According to the World Bank for the first time in a generation, the quest to end poverty has suffered its worst setback. Over the past 20 years, the world was able to reduce poverty. Global extreme poverty is expected to rise as the disruptions caused by the COVID-19 pandemic compound the forces of conflict and climate change, which were already slowing poverty reduction progress.

UNICEF warns that reduced household income due to the effect of COVID-19 on many countries’ economies may lead to more children being put to work to help their families financially, potentially exposing them to hazardous or exploitative work. Financial difficulties may also contribute to gender imbalances within families if girls are expected to perform more household chores as a result.

The United Nations General Assembly created the 17 Sustainable Development Goals (SGDs) in 2015 as a “blueprint to achieve a better and more sustainable future for all” to be achieved by 2030, many of which aim to eradicate problems and obstacles interlinked to those living in with poverty, with Zero Hunger, Good Health and Well-being, and Quality Education, being just a few. The all-important goal is SDG1: No poverty – An end to poverty in all its forms everywhere. We, NPH, as a family and as an organization, are committed to achieving these goals being a UN Civil Society Organization, and we do so very well.

It is best when each child can be in a family. Making families strong and supporting them so that children can grow up there as much as possible is our goal. Parents know what is best for their child in terms of education, health, how to deal with conflicts, and in countless other ways. They can take better care of their children and give them a better future than any institution. We help families stay together so that children do not lose their families.

NPH offers various ways to help children and families in Latin America based on their needs. Sometimes families in extreme poverty cannot afford to educate their children. In most Latin American countries school attendance is officially free of charge, but many poor families cannot afford the additional costs of school books, classroom materials, and especially the mandatory school uniforms. The young children of poor families do not go to daycare or pre-school because these are not offered by most Latin American governments and private ones are too expensive. Therefore, NPH offers free, high-quality daycare centers, schools, and family centers as a way to strengthen these families.

Sometimes a child loses their place within a family, whether through death, abandonment, or neglect. For NPH, the most important thing is for a child to continue having the love, support, and guidance of a family. In these situations, NPH becomes the new family for a child who has no longer belongs to one.

For children in crisis situations, NPH offers shelter and support so they can get help quickly. Then the well-established interaction between NPH and the governmental youth welfare offices takes effect. Children and adolescents are taken in and cared for around-the-clock in child protection homes. Siblings are placed together because they especially need each other in emergencies. After admission, one of NPH’s professional teams immediately starts searching for other family members.

As a rule, the children in NPH’s child protection homes only stay for a few weeks, at most several months. Our transition homes in the Dominican Republic and Honduras are only for short-term safe accommodation until a long-term stable solution can be found. The desired goal of emergency protective care is to place the children with another family member. Only when this is not possible is another longer-term solution is sought, such as placing the child in one of NPH’s children’s villages.

Families in vulnerable situations need support. Through tutoring, therapies, healthcare and nutrition assistance, youth formation, and parental training, the NPH family and community centers offer critical assistance to children and families in vulnerable situations. Help create opportunities for at-risk children to have a family and a positive future. Join the NPH family and help families across Latin America. By doing so, you not only enable children to have a self-determined future but also their parents, grandparents, and siblings. The future of children depends on our decisions today.

Related Information:
• How Your Help Makes an Impact at NPH
• Make a Donation

Photo above: One of our youths at NPH Guatemala spends time with her family in Acatenango, a poor rural region of Guatemala.
Photos below:
• United Nations Sustainable Development Goal 1: No poverty. An end to poverty in all its forms everywhere.
• Gualey, a neighborhood in Santo Domingo, Dominican Republic, which many of the residents survive on $1.90 a day. Photo by Fran Alfonso.
• Many of our students in community school programs in Haiti reside in many of the marginal neighborhoods throughout Port-au-Prince, who survive on less than $1.90 a day.
• Two boys at La Estacion, an abandoned train station turned into a small community in Cuernavaca, Mexico.